To us, outreach involves strengthening our relationships with our community and standing for social and environmental justice. Here are some of the things we’re doing. You’re invited to join us! 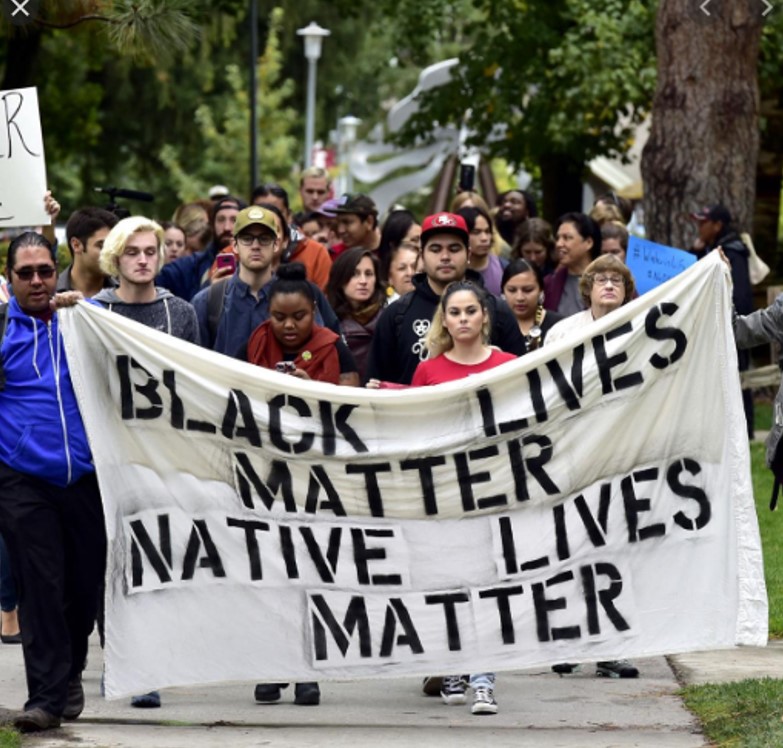 At Suquamish United Church of Christ we are committed to an ongoing program of education and action to support our church becoming an actively anti-racist church from here forward. We recognize that this is essential, sacred, life-transforming work that takes community, time and commitment.

A Church’s Commitment to Antiracism

Just what is going on with white people? Police shootings of unarmed African Americans. Acts of domestic terrorism by white supremacists. The renewed embrace of raw, undisguised white-identity politics. Unending racial inequity in schools, housing, criminal justice, and hiring. Some of this feels new, but in truth it’s an old story.

Why? Where did the notion of “whiteness” come from? What does it mean? What is whiteness for?

Scene on Radio host and producer John Biewen took a deep dive into these questions, along with an array of leading scholars and regular guest Dr. Chenjerai Kumanyika, in this fourteen-part documentary series.

On February 23, 2020, Ahmaud Arbery, 25, left home and went for a jog. During his run, two white men follow Ahmaud, confront him with a loaded shotgun, assume he’s a suspected criminal, and within minutes of their encounter–according to the recorded video–three shots are fired. Amhaud falls to the ground and dies.

The United Church of Christ invites you to rewatch this cinematic sermon by Rev. Dr. Otis Moss III. Immediately following the live video, a panel of four respected thought leaders, racial justice advocates and UCC pastors discussed the impact of historical and present-day acts of racism and violence towards African Americans, and discussed how the Christian Church can be actively involved in dismantling racism.

A more equal world starts with you. Citing a formative moment from her own life, equity advocate Nita Mosby Tyler highlights why showing up and fighting for others who face injustices beyond your own lived experience leads to a fairer, more just future for all.

An artwork’s color or composition can pull you in — and put you on the path to having important and difficult conversations, says artist Titus Kaphar. In this stunning talk, he reflects on his artistic evolution and takes us on a tour of his career — from “The Jerome Project,” which draws on religious icons to examine the US criminal justice system, to “From a Tropical Space,” a haunting body of work that centers around Black mothers whose children have disappeared. Kaphar also shares the idea behind NXTHVN, an arts incubator and community for young people in his hometown.

In a time of mourning and anger over the ongoing violence inflicted on Black communities by police in the US and the lack of accountability from national leadership, what is the path forward? Sharing urgent insights into this historic moment, the speakers discuss dismantling the systems of oppression and racism responsible for tragedies like the murders of Ahmaud Arbery, Breonna Taylor, George Floyd and far too many others — and explore how the US can start to live up to its ideals.

There is no such thing as being “not racist,” says author and historian Ibram X. Kendi. In this vital conversation, he defines the transformative concept of antiracism to help us more clearly recognize, take responsibility for and reject prejudices in our public policies, workplaces and personal beliefs. Learn how you can actively use this awareness to uproot injustice and inequality in the world — and replace it with love.

My liberation is bound in yours. This is not a feel-good statement but a reality when it comes to how racism impacts policy, budgets, and prevents us from achieving a society that works for us all

Racism isn’t funny, but in this TED talk you’ll learn about the pervasive nature of racism and laugh out loud way more times than you’ll be able to count.

More than ever before, people are Googling abolition and exploring what a society without prisons looks like. Have questions about why we can’t reform these systems or what this looks like in reality? Listen up!

Sometimes with the best intentions we still fall short. Hear from Rayna about thoughtful allyship that seeks to uplift and support, not take over or “save.”

Black history taught in US schools is often watered-down, riddled with inaccuracies and stripped of its context and rich, full-bodied historical figures. Equipped with the real story of Rosa Parks, professor David Ikard highlights how making the realities of race more benign and digestible harms us all — and emphasizes the power and importance of historical accuracy.

We can never lose sight of the people behind the statistics and in this powerful TED talk, you’ll be reminded of why we fight this fight.

Ali Michael digs deep into the white psyche as she confronts the traditional narrative of what it means to be a white American, and discuss the racial politics of being white. Ali Michael, Ph.D., is the Director of K-12 Consulting and Professional Development at the Center for the Study of Race and Equity in Education at the University of Pennsylvania and author of Raising Race Questions: Whiteness, Inquiry and Education (2015).

Racism is traumatic. Oftentimes we are focused so much on legislative changes and urgent calls to action, that we neglect the emotional well being of Black people everywhere facing PTSD from this cyclical violence. Dive more into self-care as radical preservation with this joint TED talk.

Marlon Peterson is formerly incarcerated and one of the leading national experts on alternatives to incarceration. Learn about why we desperately need more empathy when it comes to addressing harm.

University Chancellor, Susan E. Borrego, reflects on her life as an emancipated minor and dissects the emotionally charged conversation surrounding race relations in the United States. She uses her powerful first-person account of “White Privilege” and “Black Lives Matter” to underscore the responsibility each one of us has to bring about change.4

Following 2016, “intersectionality” became quite the buzzword, yet gets used out of context often by both the Right and Left alike. Hear from the black woman who coined the term in the ’80s as to how we use intersectionality to defend Black women.

This talk is designed to be a 101 for white people about what white privilege and institutional racism are and how they manifest.

#AllLivesMatter is the new color blind and both terms are proof that people fear being accused of biases more than they feel committed to addressing them. Let’s lose the shame and take bold steps deeper into your allyship.

Bryan Stevenson is one of the leading racial justice advocates, working with people incarcerated on death row. If anyone can diagnose recent injustices and understand the steps forward it would be him. 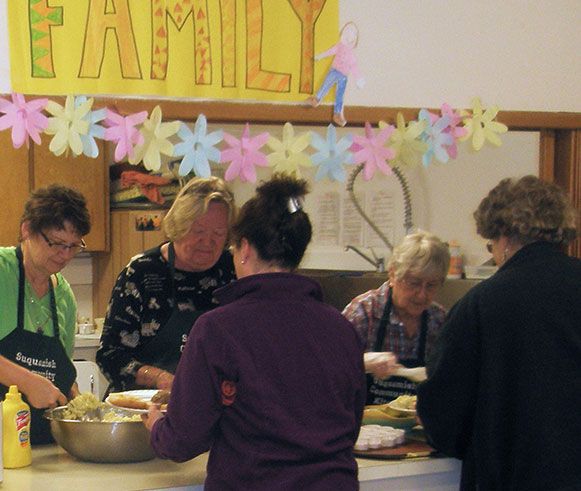 Nearly every Wednesday, we offer a free dinner to anyone. (Donations are welcome but never required.) We usually serve nearly 100 guests at each meal. All are welcome.

Come and enjoy a great meal as you see old friends or make new ones. As we like to say, “We serve community with every meal.” 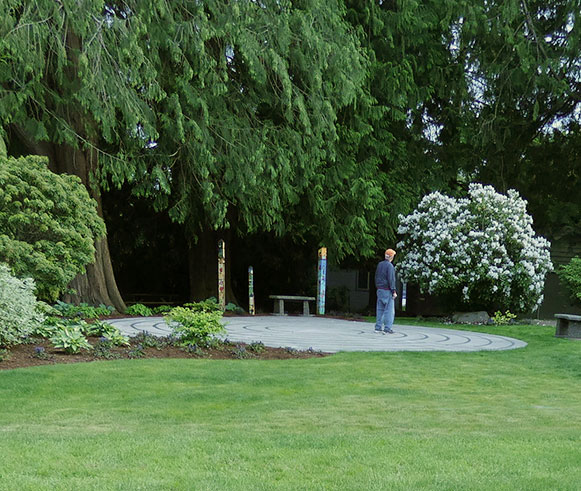 What is a Labyrinth?
A labyrinth is a walking, meditative path. It  requires no figuring out. You can simply walk, allowing your mind to quiet. There are no rules, no right or wrong way.

The Path
A labyrinth is often described as a three-fold path.

The Walk
On the labyrinth someone may be walking ahead of us at a pace we find difficult to follow. We choose whether to stay behind and walk at their pace, or go around them and honor our own body’s rhythm. Perhaps we will come face-to-face with a fellow journeyer. Will we greet them, or will we remain within ourselves and continue on the path? There is no right or wrong way; the choice is ours to make. In moments such as these, the mystery and sacredness of the labyrinth become apparent, as we consider what is important, what we call sacred.

The Design
This labyrinth uses the “Santa Rosa” design, first created by Lea Goode-Harris in 1997 and installed here by Dan Niven of Lynwood, WA. This seven-circuit labyrinth is divided into four quadrants. It includes a unique space on the fourth circuit, in line with the mouth of the labyrinth. Called the “heart space” this area is not walked, but serves as a sacred vessel where you can place symbols of your concerns, needs or celebrations. As you walk the labyrinth, you approach the “heart space” from all four directions, which allows you to see these symbols from various points of view.

From the Labyrinth Society 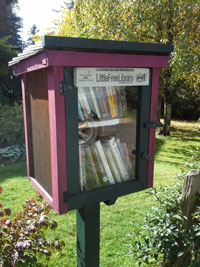 With support of our neighbor to the north, the Rohlingers’ business, we have placed a “little free library” on the Rohlingers’ property, by the bus shelter on the north side of Geneva Ave., across from our Park & Ride lot.

We’ve stocked it with some interesting and provocative books. Commuters (and others!) are welcome to take a book with them and, if they’d like, leave a book when they’re done with it. 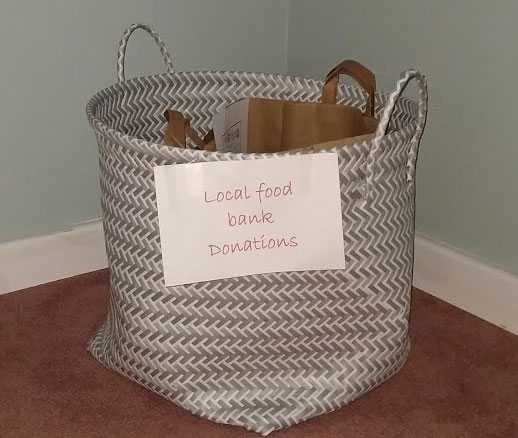 We have a basket where we collect donations of food. Each month we share it with food banks in Poulsbo, Kingston and Suquamish.

We are also pleased to host a free Food Pantry, where anyone in need can find food and other essentials at any time of day. The Food Pantry is supported by people in our community as well as our congregation. 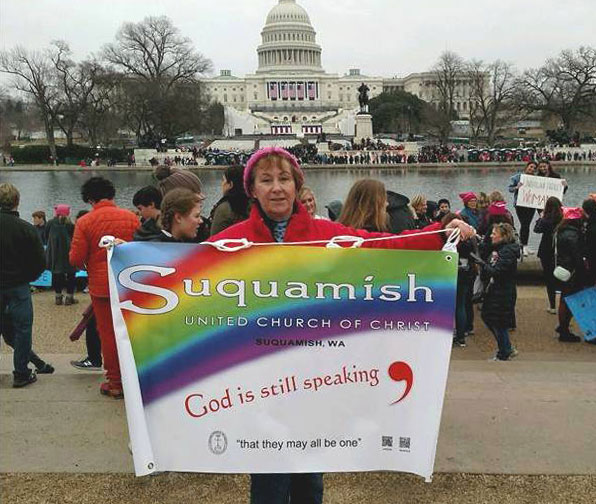 Our members regularly participate in protests and marches for social, racial, and environmental justice and peace.

We were particularly proud when eight members of our congregation traveled to Washington, DC, to participate in the national Women’s March.